The Maltese islands offer walkers some of the most stunning views anywhere in the Mediterranean.

For most of the year the Maltese islands offer some of the most fascinating country walks in the Mediterranean: an exhilarating array of scenic landscape rich in geological features, secluded beaches, coastal cliffs, historic, prehistoric and archaeological sites, coastal towers, secluded palaces of the Knights and wayside chapels scattered in remote and inaccessible corners far from the hustle and bustle of everyday life. Each walk/biking trail allows you to enjoy a variety of stunning views ranging from dramatic cliffs plunging into the waves, or the rocky, scrubland of the garrigue, to hidden, lush valleys.

If you are staying in a resort you may be surprised to learn that only about one-fifth of the Maltese islands is urbanised. In Malta areas that make excellent day hikes include Mellieħa, Dingli, Għar Lapsi, Fawwara and Wardija all close to the popular resorts in the North, and the southern coast with its fishing villages and Delimara Point. Gozo in its entirety is excellent walking country.  We have mapped below only three routes in Gozo, but other areas such as Ta’ Dgiebi near San Lawrenz, the Gordan Lighthouse near Għasri, Honoq ir-Rummien near Qala and San Blas Valley near Nadur are all excellent walking areas. Do not miss Comino which is ideal for a good day’s hiking and the ultimate in solitude and views.

The islands are criss-crossed by tracks and lanes. The possibilities are endless. We can organise guided walks with guides from local rambler’s associations who can introduce you to all the sights and local flora and fauna. Alternatively explore the islands independently on some of the following suggested walks/biking trails.

For a brochure on walks/biking trails on the Maltese islands see http://issuu.com/maltagoesrural/docs/rural_malta/1?e=8056862/2954218

From the village of Sannat, walk to Ta’ Cenc Hotel and take the country road leading south east to the open scrubland and the southern cliffs. 2km west of Ta’ Cenc is the valley of Mgarr ix-Xini and the sea inlet of the same name. Return up hill along the valley by the road which leads to Xewkija. Stop off to visit the Rotunda church in Xewkija. 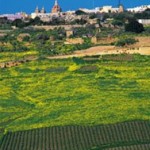 
From Mgarr Habour walk up hill a short distance to Fort Chambray. This large fortress now converted into a residential area was built in the 18th century by Bailli Jacques-Francois de Chambray. Rough paths down Chambray Hill lead to the little bay of Xatt l-Aħmar (The Red Shore) and to the southern shoreline of the island. 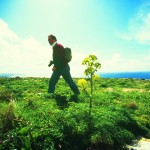 From the village of Xagħra, after visiting the oldest free standing pre-historic temples in the world – The Ġgantija Temples, walk eastwards into lush green valley. A rustic path follows the water course down to Ramla l-Hamra (The Red Sand Beach). Return from the beach by road to the village of Nadur.

From St. Nicholas Square, a typical Maltese square in Siggiewi, walk westwards (about 2 km) to the old cemetery of St Theodore below the hill known as Ta’ L-Gholja. From here take the path up the hill. A huge iron cross, the Laferla Cross, stands at the top. The original cross, erected in 1900 to mark the beginning of the 20th century, collapsed and was replaced in 1963. From the Laferla Cross follow the footpath to San Lawrenz Chapel, then continue westwards to Girgenti and the Inquisitor’s summer palace at Ghajn-il-Kbira. Today this palace is used as a summer residence by the Prime Minister. From here a good road leads to Buskett and Verdala Palace. The palace is the summer residence of the President of the Republic of Malta and is not open to the public, but provides an interesting landmark. Buses back to Valletta leave from outside Buskett’s main gate. 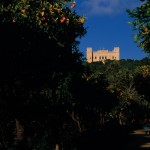 Follow the same route to Laferla Cross (Ta’ l-Ghola) as in the Siggiewi – Buskett walk. At this point take the sloping track southwards to Gebel Ciantar. Walk westwards along the ridge to the picturesque hamlet of Fawwara, then up the Cliffside to Ta’ Zuta and, a short way further to the west, to the cave dwelling at Ghar-il-Kbir (the big cave).

Close by you will see a good example of the enigmatic, prehistoric cart ruts. The concentration of these ruts here is called “Clapham Junction” after London’s main railway intersection. The strange parallel channels in the rock are thought to originate from the Bronze Age. The purpose of the ruts has never been satisfactorily explained. A short country road from Clapham Junction leads to Buskett, where buses can take you back to Valletta. 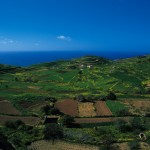 Start in Dingli village. Walk the short distance to the stretch of impressive Dingli Cliffs near the Signal Station. Walk north-westward along the ridge to il-Qaws (The Bow), a semi-circular inlet bordered by high cliffs, then on to Wied-ir-Rum at Ta’ Baldu, the tiny farming hamlet clinging to the hillside. Stop to have a look at the quaint old dwellings.  Carry on to Mtahleb another rural village in rocky surroundings. From near the church on the ridge, you can see the fertile valley below.

A path close to the church leads you down the valley to the Gwiedi hillocks and to the nearby ravine of Migra l-Ferha (The Stream of Joy). With a bit of difficulty you can get to the sea by climbing down the steep rocky slope. From Migra l-Ferha a good road leads up the cliffside to the plateau. The road then diverts eastward among cultivated fields to Fiddien Station near Rabat.

Take the road near the Roman Villa (outside Mdina). You may wish to visit the Roman Villa and the nearby St. Paul’s Catacombs and Mdina, the old capital city of Malta. Walk through Fiddien Valley to Ghemieri with its lovely view of Ghemieri Palace set on the ridge. You can reach the Palace and the hamlet on a good pathway. The countryside here is lush and picturesque.

From Ghemieri walk westward to Nadur Tower, then eastward to Bingemma Gap. From near the little chapel on the ridge you can enjoy an enchanting view over the village of Mgarr and the surrounding lush countryside. Here there are also a number of ancient rock-cut tombs on the hillside which flanks the valley.

From a narrow path near the church follow a stretch of the Victoria Lines (The Dwerja Lines) up to the crossroad at Falka Gap. The road to the south leads to Mosta where you can visit Mosta Church with the third largest unsupported dome in the world, after which ,you can pick up buses to Valletta or St Paul’s Bay. 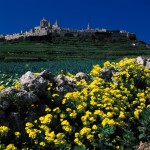 Starting in Mgarr visit the Ta’ Hagrat prehistoric temple a short distance from Mgarr church. Access can be arranged by contacting the Custodian of the Roman Villa Museum, in Rabat prior to commencing your walk. Walk westward behind the church to the heights overlooking the valley of Gnejna and Gnejna Bay. Carry on southwards to the tiny farming communities of ta’ l-Iskorvit and Is-Santi. A country road leads eastword to the Bingemma pumping station. From here take the road going north. Walk back to Mgarr when you get to the crossroad. 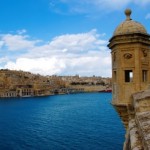 Tour of the Cottonera Fortifications 3.5 km

Start outside Vittoriosa (Birgu) at the Salvatore Gate where you may wish to visit Fort St. Angelo and the Victory Church before you proceed to follow the curtain wall and the bastions in the direction of Cospicua. Continue past St Edward’s College to the Zabbar Gate. Stop and have a look at this monumental gateway adorned with the bust of Grand Master Nicola Cottoner and with a Latin inscription commemorating construction of the fortifications.

Carry on along the fortifications to Polverista Gate and to Cospicua Gate at Ghajn Dwieli near the entrance to Malta Dry docks. The Cottonera Lines were designed by the military engineer Maurizio Valperga. Construction started in 1670 at the commission and expense of Grand Master Cottoner. The lines are 3 km in circumference and are made up of eight bastions and two demi-bastions and are pierced by five gates. The Lines as they stand today took more than a century to build. 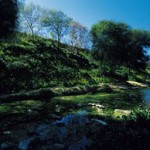 In Xemxija admire St. Paul’s islands where in 60 A.D. the Apostle Paul was shipwrecked on his way to Rome. Proceed 1 km along Ghajn Tuffieha Road and take the road on the left uphill to San Martin. Almost at the top of the hill there is a grotto with a shrine to the Holy Virgin, a place of devotion still visited today.

Proceed on to the cross at Ta’ Saliba and take the country road leading eastwards to Wardija Heights and the small hamlet of Wardija. The church there adjoins the country house of a noble family. The ridge provides a wonderful view of St. Paul’s Bay and St. Paul’s islets.

Walk down the steep road to the farming village of Bumarrad. A short road to the left of the parish church leads uphill to St Paul Milqi, a medieval church site in what used to be a rural settlement in Roman times. The church makes an interesting detour. According to tradition this is where the Apostle St. Paul spent his first days on the islands after his shipwreck here in A.D. 60. Roman remains can still be seen on the site around the church.

Return downhill to Bumarrad. The main road here leads northwards to Salina Bay and St Paul’s Bay. To the south it leads to Mosta and other places in Malta’s interior. 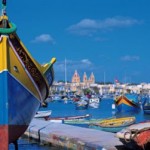 From Marsaxlokk, the fishing village with the largest fishing fleet on the island, head westward to the promontory and the tower of St Lucian. This massive castle-like tower was commissioned in 1615 by Grand Master Alof de Wignacourt.

Proceed downhill to St. George’s Bay and take the main road leading northwards to Ghar Dalam (the Dark Cave). This grotto appears to have been home to the island’s first settlers some 7,000 years ago in the Neolithic period. The large cavern was found to contain the bones of prehistoric animals, with some species such as the dwarf elephant, hippos and deer indicating that Malta once bridged the European and African continents.

Proceed south again to St George’s Bay and follow the short path up to Borg-in-Nadur, the site of a prehistoric temples and also a bronze-age village the only trace of which today is a massive stone wall, once fortifications for the domestic dwellings.

Return again to St George’s Bay then proceed on to the sandy beach of Pretty Bay, Birzebuggia. Stop off at one of the cafés for refreshment before heading up to Hal-Far, the old RAF aerodrome.  Then turn left on the secondary road leading to Ghar Hasan, a large cave on the south-eastern cliffs. Legend has it that during the Great Siege of 1565, a Saracen kidnapped a Maltese girl and kept her captive in this cave. He was eventually found by locals and leapt into the sea, taking the girl with him. The cave is also known for its colony of bats.

From here return to the main road which soon branches to Zurrieq and Luqa.

Contact us at V. Tabone Travel should you require any further information or to obtain a
quote.