Wherever you go on the Maltese islands you will see baroque churches with their distinctive red or silver painted domes silhouetted by the skyline. Each church is an architectural gem filled with its own history and cultural treasures.

The Co-Cathedral of St John in Valletta is the most prestigious historical monument on the Maltese islands, housing great art works by Caravaggio and Mattia Preti. However short your stay in Malta this monastic church of the Knights of St John is a must see.

The other remarkable cathedrals of the Maltese islands are at Mdina where the dome provides an imposing landmark and the cathedral within Gozo’s Citadel. Other religious sites range from the Mosta Church with the fourth largest dome in the world, to small grottos and cave chapels as well as places of pre-Christian beliefs, such as the islands’ prehistoric temples. The Maltese islands truly provide a treasure of churches to discover.

St. John’s Co-Cathedral is a gem of Baroque art and architecture and is arguably the most prestigious historical monument on the Maltese islands. It was built as the conventual church for the Knights of St. John. Its exterior is stark. The austere facade is reminiscent of the fortifications of Valletta, the fortress city in which it stands. Meanwhile the interior is breathtakingly lavish, reflecting the Knights’ deep appreciation and patronage of culture and the arts. In fact the Grand Masters and several knights donated gifts of high artistic value and made enormous contributions to enrich it with only the best works of art. This church is till this very day an important shrine and a sacred place of worship. It is also a venue for cultural events.

The Cathedral itself is testimony to the talents of Maltese military architect Gerolamo Cassar who designed the Cathedral between 1573 and 1577 as one of the first and main buildings of the Knights’ new capital Valletta. It is also a masterpiece of Mattia Preti the Calabrian artist and Knight who embellished the interior in later years. Preti designed the intricate carved stone walls and painted the vaulted ceiling and side altars with scenes from the life of St. John. The Cathedral oratory houses one of Europe’s most impressive and famous art works, Caravaggio’s masterpiece The Beheading of St. John the Baptist. St. John’s is a shrine to the Knights. Many sons of Europe’s noble families from the 16th to 18th centuries lie buried here and remembered by hundreds of intricately inlaid marble tombs which cover the entire church floor other than the altar and choir areas. 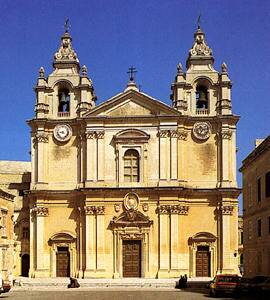 Mdina with its baroque cathedral, bastions and palaces, is an imposing landmark visible throughout central Malta. The Cathedral is the architectural heart of this elegant, walled city. In fact the building of the Cathedral between 1697 and 1702 caused a major redesign of the centre of medieval Mdina. Several streets and houses were cleared to create a more open view across a square in front of the Cathedral.

This late 17th century masterpiece of Maltese architect Lorenzo Gafa’ lies on the site of a much earlier Norman church destroyed by a violent earthquake in 1693. According to tradition that church had been built on the site of the house of Publius, the Roman’s chief man on the Maltese islands who was converted to Christianity by St. Paul in A.D. 60.

The building is one of the finest designs by Lorenzo Gafa’. Its imposing façade greets you abruptly as you emerge from Mdina’s narrow streets. The building is topped by a magnificent dome which dominates the skyline of Mdina. The dome is possibly one of Gafa’s greatest achievements and had a chequered history as a succession of painters tried to embellish its interior. Today’s decoration dates from the 1950s.

Gafa’ seems to have created in miniature a Cathedral almost as fine as Valletta’s St. John’s. The interior is lavish and has similarities with St. John’s. Here too you find great works by the Calabrian artist and Knight Mattia Preti. The pavement also comprises marble-inlaid tombstones carrying the coats of arms and inscriptions of the bishops of Mdina and other members of the Cathedral chapter.

Between the main altar and the apse is Preti’s monumental depiction of The Conversion of St. Paul. It was part of the original Norman church and survived the earthquake. A few other items remain from the old church: the 15th century Tuscan panel painting of the Madonna and Child, the font, the frescoes in the apse depicting St Paul’s Shipwreck, and the old portal made of carved Irish bog wood which now serves as a door to the vestry.

In addition to Preti several other Italian artists worked on the Cathedral up to the mid 20th century. The vaulted ceiling was worked on by Sicilian Vincenzo Manno around 100 years after the Cathedral was built.

The most magnificent aspect of the Cathedral remains Gafa’s design. The façade is perhaps one of the most imposing yet harmonious of all his baroque churches and a lesson in the use of proportion.

The Cathedral Museum nearby houses a rare collection of coins, silver plate, religious vestments and some woodcuts by the German artist Albert Dürer. 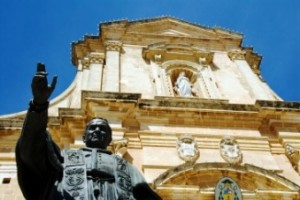 Cathedral of the Assumption, Victoria, Gozo

The Citadel appears to perch even more precariously on its flat-topped hill than its Maltese counterpart Mdina. The Citadel is dominated by its Cathedral, another baroque masterpiece by Maltese architect Lorenzo Gafa’.

The Citadel has been a landmark and focal point on the island since at least 1500 B.C. and the Cathedral itself had several predecessors, some more mythical more than real. The first structure on the site was probably a Phoenician temple. This was rebuilt and enlarged by the Romans, and in due course changed status into a Christian church. The building underwent various reconstructions until an earthquake damaged it, like the Mdina Cathedral, in 1693.

Whatever the origins of the site, remains of a Roman temple were unearthed here before the ‘new’ cathedral was built. The Cathedral’s predecessors were known as ‘Matrice’ or mother church since early times. It was probably the only parish church on Gozo for several centuries.

Today’s structure built between 1697 and 1711 is a superb example of Mediterranean baroque. It is similar to Mdina Cathedral but on a smaller, more modest scale. The understated façade rests imposingly at the top of a steep flight of steps. While Gafa’ is renowned for his elegant domes, the cathedral is without one. It was never completed due to a lack of funds. Instead it has a masterful illusion, a tromp l’oeil giving the impression of the dome’s interior painted by the Italian Antonio Manuel. 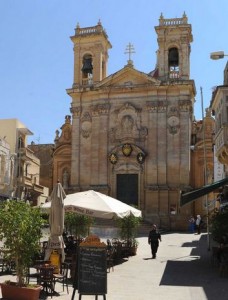 The parish church originates from medieval times circa 1450 and the foundation stone of the present church was laid in 1672. It is rightly referred to as the marble basilica as it is entirely covered with marble.

The bronze and gold gilded canopy over the high altar is impressive indeed, but the main attraction is a statue of the patron saint St. George sculpted in wood by Pawlu Azzopardi in 1838. It is the first titular statue acquired by a parish church in Gozo.

The Basilica of Ta’ Pinu is the most famous place of pilgrimage for the Maltese Islanders. Its origins go back to a day in June in 1883, when a woman heard the voice of the Virgin Mary in an old chapel. In the following years, many miracles and acts of grace were manifested at the site.

Many believe that the prayers said in the chapel saved Gozo from the plague, which had stricken Malta at that time. The locals therefore decided to build a larger and more magnificent church on the site in honour of the Blessed Virgin. Funds were raised from Gozitans, including those living abroad and works on the new church began in 1920, with voluntary labour from the local community. In 1931, Ta’ Pinu was consecrated and a year later Pope Pius XI raised it to the status of Basilica. The original 16th century chapel was fully integrated into the new church. 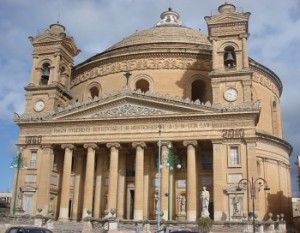 Built in 1860 over another church that was built in 1614, the church of St. Mary is the parish church of Mosta. The interior of the church is impressive with its circular shape and clear interior.

The awesome dome is the fourth largest in the world and famous due to the incident that took place during WWII – a bomb pierced the dome in 1942 landing on the church floor and slid across the floor without exploding. The church was crowded when the bomb hit and all were spared. The bomb is now on display in a small museum attached to the church.

Mosta’s titular feast of St. Mary or the Assumption of Our Lady is held on August 15th, a high point in the local religious celebrations. The people of Mosta rally in front of the Rotunda in a manifestation of joy, merrymaking and social wellbeing. 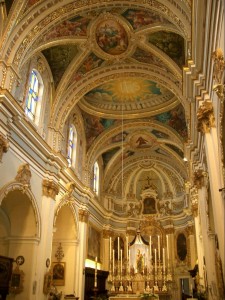 St. Paul is considered to be the spiritual father of the Maltese. His shipwreck is popularly considered as the greatest event in the nation’s history. For this reason St. Paul’s Collegiate Church is one of the most important in Malta. The church hosts fine artistic works, including the magnificent altarpiece by Matteo Perez d’Aleccio, the choir and dome of Lorenzo Gafà, the paintings by Attilio Palombi, and Giuseppe Cali and the titular statue of Melchiorre Gafà. One can also view the treasured relic of the right wrist-bone of St. Paul, and part of the column on which the saint was beheaded in Rome.

The church is built on the site of another church which was constructed in 1609 but was demolished in 1639. The plans of the new church were prepared by Bartolomeo Garagona. The facade was rebuilt in 1885 to the design of Nicola Zammit. 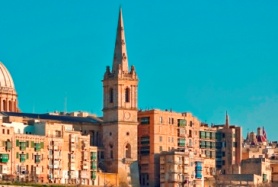 At the end of Archbishop Street in Valletta is St. Paul’s Anglican Cathedral. It was built between 1839 and 1844 and funded by the Dowager Queen Adelaide widow of King William IV.

During her visit between 1838 and 1839 she discovered that there was no Anglican church in Malta and ordered one to be built. The cathedral was finally built on the site where the Auberge d’Allemagne, home to the German knights, used to stand but was knocked down to make way for the new cathedral. The cathedral was dedicated to St. Paul and has a huge steeple of 65m (210ft) which stands out marking the capital’s skyline.

Next to the cathedral is the Carmelite Dome which was replaced in 1958 after the dome was bombed during World War II. 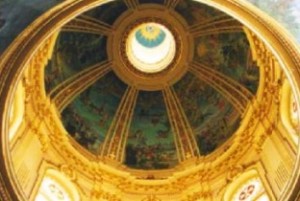 Church of Our Lady of Victories, Senglea

The Collegiate Church of Our Lady of Victories (the parish church of Senglea) built in 1743, was destroyed in January 1941 during a severe air attack on the HMS Illustrious which was berthed in the creek nearby.

Work on the new church was finished in 1957 when it was reconsecrated. The parish had been elevated to the rank of Basilica in 1921 by Pope Benedict XV. The most precious treasure in the church is a wooden statue of the Virgin which is kept in the last chapel on the left of the nave, encased in silver.

The feast, when the statue is brought out of the church, is a memorable sight. The Church is dedicated to our Lady of Victories, also known as Maria Bambina.

In front of the church is a monument dedicated to those who died during the bombing of World War II.