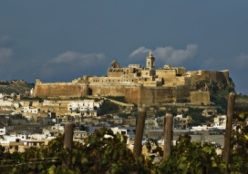 The Citadel in Gozo owes its roots to the late medieval era, but the hill has been settled since Neolithic times. After the Great Siege of 1565, the Knights set about re-fortifying it to provide refuge and defence against further attack. Until 1637, the Gozitan population was required by law to spend their nights within the Citadel for their own safety. In later, more peaceful times, this restriction was lifted and people settled below its walls, creating the prosperous town of Rabat, now known as Victoria. 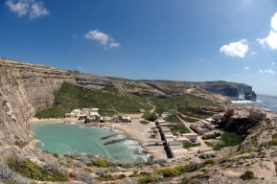 The Inland Sea is an inland lagoon in Dwejra, and is perhaps the archipelago’s most spectacular natural landmark. The Inland Sea, and Dwejra Bay itself, were created millions of years ago when two limestone caves collapsed. The shallow inland lagoon is linked to the sea via a 100 metre cave in the cliff. On calm days, small fishing boats carry visitors out to sea through this tunnel, in order to see Fungus Rock. The sea is used by fishermen and bathers, and is also a very popular diving spot. Overlooking the lagoon is the Chapel of St Anne, built in 1963 on the site of a much older church. 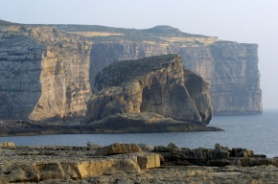 Fungus Rock is a huge rock in Dwejra Bay, on the western coast of Gozo.  Access is only by boat.  The average depth is of 40 metres.  This isolated rock has a hole running through its northern part.  Underwater, the scenery is as impressive as above, with vertical walls, fissures, gulleys and caverns created by boulders, which provide excellent habitat for the largest groupers.  Looking upwards, one can often see tuna, amberjacks and barracudas.  The walls of the rock are covered in algae, sea urchins, tube worms, starfish, bristle worms and sea potatoes, with their brilliant red colour. 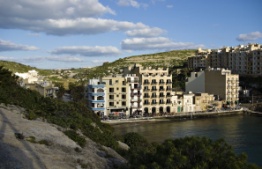 The delightful sea inlet, known as Xlendi Bay, lies at the end of a deep, lush ravine which was a river bed. Until the mid 20th century, Xlendi was a small fishing port and a restful summer resort for a few locals and Maltese. The bay is now on the must-visit list of most day-trippers to the Island, but it is worthwhile lingering a night or two to enjoy the sunsets. The Bay still retains a peaceful atmosphere and is surprisingly undeveloped though there is a good choice of accommodation from apartments to hotels; most options have sea views. Xlendi is flanked by steep cliff. For some of the best views, climb the stairs up the cliffs to the right. Bathing in Xlendi is usually off the rocks along the bay with access down ladder into the deep crystal clear water. On the left side of the bay, two tiers of pathways provide ample space for both a walkway and a flat space to spread out a towel and sunbathe. On the promontory is Xlendi Tower, built in 1650. It commands superb sea views and stand on a scenic coastline pitted with hand-dug salt pans 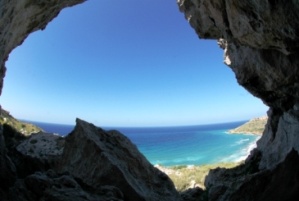 This cave is situated in a cliff face, a short distance from Xaghra and overlooks the red sands of Ramla Bay.
This cave is assumed to be the cave referred to by Homer in `The Odyssey’ where Calypso, the beautiful nymph kept Odysseus as a `prisoner of love’ for seven years.
The cave’s interior and exterior are not too impressive but the magnificent views are worth it. 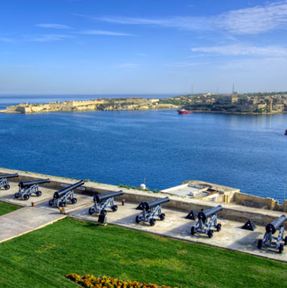 Barracca Gardens offer the best view since they’re more centered and at a much higher level. The garden was the gift of an eighteenth-century knight. The Anglican Garrison Church partly intrudes upon it. The garden is built on top of a demi-bastion. The Grand Harbour side of the Gardens is surrounded by a wrought-iron fence. The view of the harbour from this vantage point is magnificent and many people spend hours taking in the site.

An arcade on the same side gives this area the feeling of a balcony. A number of statues, monuments and plaques fill the gardens. A small fountain full of water-lilies and gold fish is located at the center of the garden 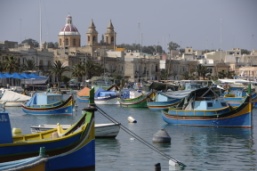 Marsaxlokk Bay is Malta’s second largest natural harbour. It is the best place to see the colourful, traditional Maltese fishing boats, the Luzzus, with the mythical eye painted on their prows. The village is the Islands’ main fishing harbour; its Sunday fish market a fascinating insight into local life and a traditional industry. The stalls brim with the night’s catch – fish of all shapes, colours and sizes. The village itself has many good fish restaurants. Marsaxlokk derives its name from the Arabic word marsa, meaning harbour, and Maltese for the south-easterly Mediterranean wind, the Xlokk (Sirocco in Italian). Marsaxlokk, with its sheltered habour, was an easy landing place for pirates and the Ottoman Turks. It was here that the Ottoman Turks landed for an attack which ended in the Great Siege of 1565. Napoleon’s army landed here in 1798; and in recent times, the harbour was the scene of the Bush-Gorbachev Summit,1989. The headland to the left of the Bay is Delimara Point. It has two attractive, secluded rocky inlets suitable for swimming: Peter’s Pool; and the furthermost part of the headland. Fort Delimara, on the west of the peninsula, was built by the British in 1881 to guard the entrance to Marsaxlokk Bay.

Marsaxlokk has been listed in Distractify’s 40 Incredible Secret Places Most Travelers Don’t Know About.

This natural picturesque grotto and its neighbouring system of caverns mirrors the brilliant phosphorescent colours of the underwater flora.  The Blue Grotto is located near “Wied iż-Żurrieq” south of the town of Żurrieq.  A number of caves, including the Blue Grotto, which is the biggest one, can be reached by boat from Wied iż-Żurrieq.  From Wied iż-Żurrieq one can also see the small island of Filfa.  Filfla is uninhabited except for a unique species of lizards that live there. When Malta was a British colony, the island of Filfla was used for target practice by the British Armed Forces. The island is now protected under Maltese law. The scenery around this area of the island is breathtaking. The cliffs rise out of the blue Mediterranean and the froth of the waves as they hit the rock face can make for some excellent shots.

Dingli Cliffs are an impressive sight, especially if view them from sea level on an island cruise. They are the Island’s natural fortress, one bastion the Knights did not have to build to protect themselves. From the cliff tops, one of the most striking views and sheerest drops is just west of Dingli village. Another atmospheric view is over to the uninhabited isle of Filfla. The tiny chapel of St Mary Madgalene perched on the edge marks the highest point on the Maltese Islands, some 250 metres above sea level. Below the cliffs, where the land slopes before plummeting again, farmers have managed over the centuries to cultivate tiny terraced fields. The cliffs extend well beyond Dingli village. The south-westerly stretch takes in the evocative heights of Buxih, Fawwara, Ghar Lapsi and Munqar, above the sea at Blue Grotto. Dingli Cliffs seem to exude a mysterious charm especially late evening on calm summer days when the sunsets here can be dramatic.

The most impressive and dense concentration of these cart ruts are on scrubland south of Buskett Gardens, an area known as Clapham Junction. The number of pairs probably runs to several score – certainly at least 30. One pair, running across the crest of the ridge intersects all the others. Near the westen wall bounding the site are a number of Punic tomb shafts one of which cuts through a rut proving the rut’s greater antiquity. 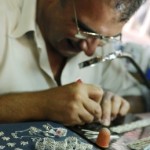 The former World War II military aerodrome was converted into a local hand-crafts centre. It’s the ideal place to buy ceramics, jewellery and knitwear, pottery and see glass blowing and moulding as well as other craftspeople at work.  Here one can buy something completely unique and original to take home.  Within the craft centre one can find the Aviation Museum displaying aircrafts.